We all are familiar with cracks and splits, which often are also called shakes. These develop after a tree has been cut down. The fibres in the end grain are exposed to air, therefore the moisture rapidly evaporates, which causes the fibres to shrink, and something’s got to give, so the cracks develop, usually in a radial manner from the pith outwards.

However, there are occasions where, sometimes even already during the lifetime of the tree, complete layers of fibres come apart. This is invisible from the outside, because there is no crack on the surface. As these splits usually develop along the annular rings, they are called ringshakes. They can be a turner’s nightmare.

Last weekend I obtained 4 nice pieces of yew during a club meeting. They had been dried for many years, the bark came off easily in most places. Yes, there were some cracks, but yew is famous for that, so nothing unusual. I put three pieces in storage, and the fourth went straight onto the lathe, as I could see a nice hollow form emerging from it. 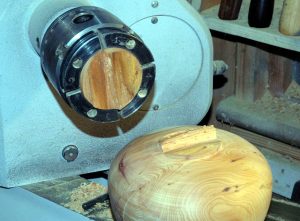 As it were, nature did not want to play along. I had the outside shape defined, and started to hollow it out, when the tenon gave out. There was no catch, not even a particularly deep cut, just a plain failure.

If you look closely at the tenon left in the chuck, you can see a discolouration on parts of the surface. That’s where the ringshake is, the discolouration being caused by exposure to air for some time. Here’s the actual piece (with tenon removed: 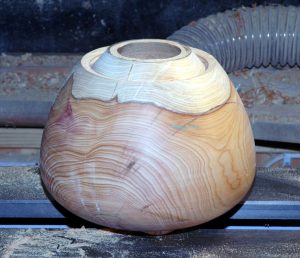 As luck will have it, there’s enough material left to make another tenon, reduce the entire shape a little and still finish it (after filling all the cracks). But this goes to show that you never quite know what’s inside until you get there. Beautiful grain and colours, yes, but it comes at a price.

This entry was posted in Turning and tagged Calamity, Shapes. Bookmark the permalink.