During 2014 and 2015 it became increasingly clear that my old workshop was just too small to host all the tools I needed to do all the things I wanted to do. Up until a certain point I couldn’t justify this as a reason for a move, but then Helen also wanted to be either closer to the horses or out in the countryside altogether, and so early in 2016 we decided that it was time to start looking for a different property, with more space for me, and either with ground and stables or at least closer to the horse yard.

Eventually we found our new house, in the same town, about a mile from the old one. It doesn’t tick all the boxes, but it’s definitely an improvement over the last one, even if the house itself needs a lot of work. It took seemingly forever to get the mortgage sorted, as the banks got completely hung up on some minor details in the evaluation reports. We finally moved in just before Christmas 2016, and now, 6 months later, the workshop is almost complete (we also finished work on 2 rooms in the house, and some other upgrades). So here are a few pictures from the new workshop, almost completely kitted out: 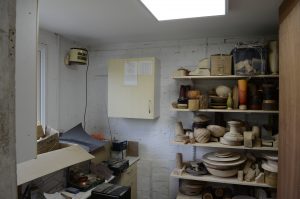 The shop spans the entire width of the garden, which is just less than 10m, and is about 3m deep, with a concrete floor, solid brick walls and a pent roof. I had to put new windows and doors in, and a completely new electricity supply, which meant a brand new ceiling (the old one was rotten anyway). Plus damp proofing, painting, epoxy floor paint. 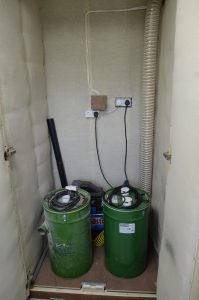 The smaller one houses my (self-constructed) sound proof cabinet for the chip extractors and the compressor, plus some storage, and has a worktop in front of the windows from wall to wall. This will be my “clean” room, for airbrushing and lacquer finishing. At the moment it’s used for storage and not much else.

In the main room, I have loads of power outlets and a dust extraction system with 4″ pipes on the backwall, and 2.5″ pipes across the ceiling and down the front wall (re-used the kit from the old workshop). 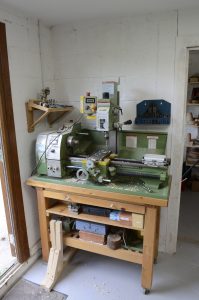 Right behind the door is the “green goddess”, my engineering lathe with milling attachment, sitting on an old kitchen block. 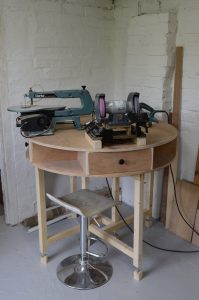 On the opposite wall is my newly constructed rotating tool station. At the moment this only has the scroll saw and a small bench grinder on it, but it will eventually also have a bench pillar drill and a thicknesser. 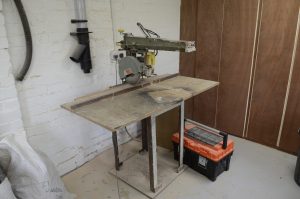 Then there is a gap on the backwall, this is where a bandsaw will take up residence, and some space will be left for the trestles and an extended in-run table for radial arm saw. Ultimately this saw will be paired with a sliding compound mitre saw (yet to be purchased), sharing a common table with space underneath for the trestles and my old trusty metal bandsaw.

Moving along to the end of the back, I have built a storage cabinet along most of the side wall, fitted between the back wall and a protrusion in the side wall (the original purpose of which completely eludes me). 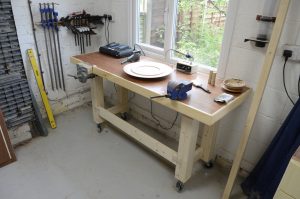 The rest of the side wall is taken up by storage for clamps and the new distribution board, which will ultimately be covered by a tool cabinet (yet to be constructed).  Next we come to the front wall of the workshop with its 2 new big windows. In front of the left hand side, there is my brand new, self-built carpenter’s workbench. This is currently on coasters, as I wanted it to be mobile, but I am beginning to think this may have been a mistake. I may have to review this at some point. The main body of the bench is made from a torsion frame with slabs of plywood on both sides, and lined with some pine liners.

The single upright piece of pine on the right of the picture has now been converted into a floorstand for my carving motor, complete with a small platform for carving heads and other bits, and weighed down on its foot by several pieces of leftover stainless steel. 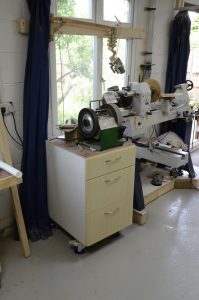 Then we have a mobile grinding station with my Tormek on top. The drawers are filled with all sorts of jam chucks, grinding accessories and what not else. At the back I mounted a few shelves for all the boxes containing jaw sets for the chucks. This has actually worked out fine, except initially I had the rack for the turning tools mounted to the side of it. That was not a good idea, as every time I was using the grinder, I knocked at least one tool of the rack, and often most of the others followed suit. 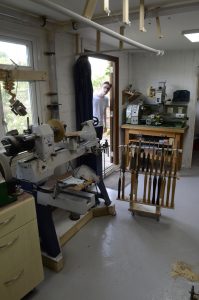 And finally, in front of the central window, the “white goddess”: the main turning lathe, now on a slight pedestal with a cutaway for my feet, so I can get close to the bed. I mounted my latest incarnation of the extendable light arm on a sliding bar across the window, so now I have light anywhere on the lathe and even on the workbench if needed. I finally got myself a posable hose for all those sanding jobs, and I built a brand new tool rack on coasters for all my turning tools. Again, this is held firmly to the ground by a solid chunk of iron.

There’s still some work to do, but so far I am quite chuffed and very happy to spend time in the shop.