The Colour Of Magic

I have always been a big fan of the large diameter work by Douglas J Fisher, but at the same time it’s always been clear to me that simply copying him would not cut the mustard. Plus, since I don’t live on the Pacific coast, it would be culturally inappropriate. In other words, I have to find my own style, and it has to express my cultural background and surroundings.

I cannot claim that I have found that style yet, but at the least I have started the journey. 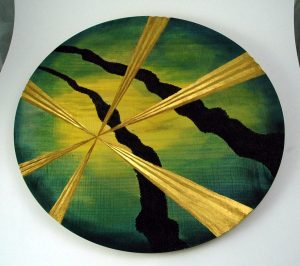 This is 20″ in diameter, made from a single piece of rippled sycamore, and then carved with rotary tools (for the black dimples) and reciprocating or hand tools (for the rays), and finally coloured with textile dyes, black acrylic paint and gilt varnish.

Initially I was tempted to call this “The Light Fantastic”, but then decided that that didn’t quite hit the nail on the head, so I changed it to “The Colour Of Magic.

As Terry himself makes one of his characters say: “It was octarine, the colour of magic. It was alive and glowing and vibrant and it was the undisputed pigment of the imagination, because wherever it appeared it was a sign that mere matter was a servant of the powers of the magical mind. It was enchantment itself. But Rincewind always thought it looked a sort of greenish-purple.”

Now, clearly digital photographic cameras cannot make a picture of octarine, that would be just too mundane. It might work if you had a camera magica, but I am jnot sure. At any rate, I don’t have one of those. So you’ll just have to be content with swirling greens and purples. Sorry for that.

This entry was posted in Decoration, Musings, Turning. Bookmark the permalink.