When we arrived in the UK in 2002, we couldn’t afford to buy a house. Our fortunes changed to the better, and with some hard work we did eventually buy a house in 2004, got married the year after, and after 10 years the refurbishment was finally complete. For all these years, I didn’t have a workshop and everything was done in the conservatory. So I decided that now was the time to rectify this situation. Here’s my lovely little garden house, as seen from the balcony: 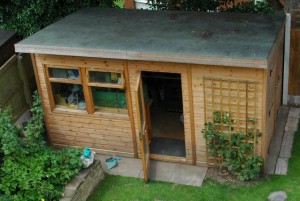 The workshop in the garden

On the right hand side is the storage section, where I keep a lot of smaller pieces, and also some rough turned items (in addition, of course, to all the gardening tools and other bits and pieces usually found in a shed.

The left hand side is insulated, and just big enough for a decent one-man workshop.

Initially I set out to build models in here, usually scratch built. In consequence the workshop was kitted out as a metal workshop, so that I could build my own little steam engines. How things can change…

I then proceeded to buy myself a proper lathe. Mind you, a metal lathe: 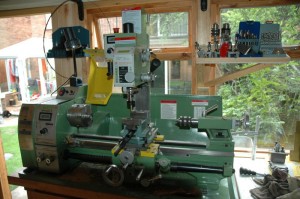 OK, not a professional machine, but still quite capable of doing some nice work. 10″ swing over the bed, 20″ between centres, with a variable speed drive, automatic feed (also cross-feed), and capable of cutting both metric and imperial threads. And, as you can see, a milling attachment followed not long after, as this was considered a must-have for making steam engines.

On the top right and top left you can see some of the accessories, and the lathe sits on top of a converted kitchen block, which had a drawer and some shelves fitted, where further bits and pieces are stored. In fact, I have just about all the kit needed to do proper metal work. Doesn’t get used much at the moment, but then, you never know. And it does come in handy when I need that special tool and I don’t want to fork out money. 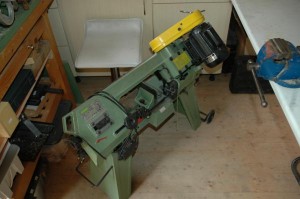 The bandsaw can also be flipped up and fitted with a table.

Finally, I bought myself a band saw, as I got tired of spending hours cutting metal bars by hand (you should try it, it’s a really good workout, if somewhat boring). Although this is a metal band saw, it does have a quite fast gear, and does cut wood very nicely, up to about 6 inches thickness. The entire cutting head can be flipped to vertical, and a small table fitted.

I then have to sit on the saw bed, but it’s not too uncomfortable. For now, it does what I need it to do, and it fits under the work bench (space to the right, underneath the vice. I have even made myself a swivel mounting for the table, so that I can do mitre cuts in two directions. 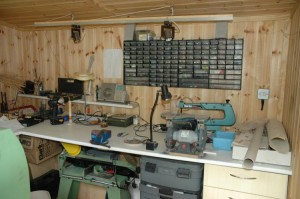 Just enough space for one!

And last, but not least, my general work bench, surrounded by bench grinder, scroll saw, storage, loads of plug points and little tools.

These pictures were taken a while before I started turning wood seriously, and in consequence a few additions are not visible in them. I have a CamVac extractor, which is located in a storage cabinet, with 2.5″ piping running all around the top of the work bench and various outlets.

When I realized that I needed more light, I converted the downlight spots visible above into an adjustable fitting, which rotates under the ceiling and can be adjusted in various degrees of freedom. Initially this was fitted with 2 x 50W halogen bulbs. That was bright enough, but it almost burned my ears off, so I changed them for LED bulbs. The result is a very bright, directional light source, which can be pointed where I need it: perfect.

There are quite a few additions to the workshop I made myself, and these will all be covered in separate little pages.