Bowls cover all items that contain a central indentation, and have a diameter that is greater than the height of the item (usually by quite a bit). 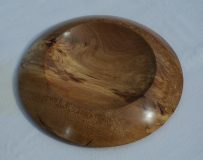 I do not remember where I picked up the wood for this bowl. It certainly looked very unpromising on the outside, and the beautiful figure only became visible once it was being turned. With wood like that, there's no need for any embellishment, [...] 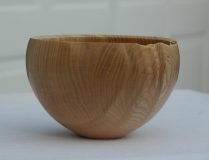 I had two pieces of ash coming from the crotch in a very large tree. Both of them were completely irregular in shape, and therefore slightly challenging in terms of figuring out what to do. This is the result for the one bowl I still have, the [...] 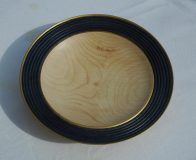 This is the first item to appear in my sales pages made from all the rippled sycamore I recently harvested from a tree in Birmingham. Here we have a very classical ogee shape on the underside, with a wide, shallow bowl on the top, and a carved [...]

This bowl was made from the wood cored out of another (quite massive) bowl, which was made for a commission. In fact, the inside of this bowl yielded another small bowl. The tree must have had some serious injury early in its life, since all t [...] And another offcut from an oak tree, possibly the same tree as the other rustic bowl. Again, the sides are straight from the chainsaw, and juxtapose the nicely finished bowl. This one had still quite a bit of stress in the wood, and is develop [...] 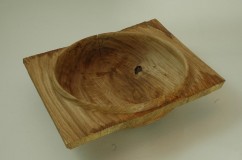 This bowl was made from an offcut from an oak tree. I guess, the guys who cut down the tree took all the decent wood for themselves and left a few pieces behind that were of no use to them. Well, one man's rubbish is another man's gold (or som [...] This is about as simple as a bowl can get. A very basic shape that does not distract from the quite dramatic figure of the wild cherry, with a small, wide foot, so that it will stand very securely. This bowl is meant to be used, not shown. Wa [...] 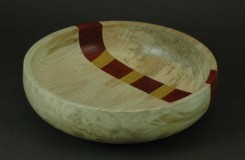 The piece of sycamore selected for this bowl was rectangular instead of square. I could have just trimmed it to square, but instead decided to do the opposite. I cut a strip off, then made another strip of laburnum and padauk pieces and insert [...] 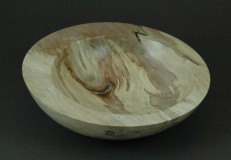 A bowl with an asymmetric design. The top of the bowl is tilted at an angle, and the bowl inside is offset to one side, creating an interesting perspective. In addition, the marvellous grain of the spalted sycamore is a constant attraction. I have two of these small bowls, with almost identical shape. Unfortunately one of them has a few dings, and I won't be able to sell it. However, the other is perfectly fine and shows off the strong spalting that happened in this piece of syca [...]