During my cruising for inspiration I have come across the work of a certain Douglas J Fisher, and I am quite besotted with it. For those not familiar with him, he makes predominantly (but not exclusively) large decorative wall hangings. Mostly maple, often rippled, with off-centre rim decorations and pacific native american motives engraved, and coloured with ink a variety of muted dyes. If I had the money, and lived a little closer, I would probably buy one for my home.

So, the next best thing really is to imitate the man. As they say: imitation is the most sincere form of flattery. I’d love to do some work in a similar direction, but obviously with my own style (yet to be developed). Clearly it cannot include any native american motives, since I don’t live there. And the off-centre turning is tricky without a vacuum chuck (which I don’t have (yet)). So, simple steps to start with and then we’ll see.

This is my first attempt. Not bad, methinks, but there are improvements to be had. 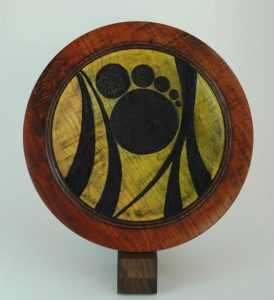 The definition of the motive is good, but could be better. The colouring is almost where I want it. The biggest issue really is that the black stain used for the carved areas has seeped across the nicely carved boundaries and edges and that has blurred the entire image. I have already bought a variety of other inks to see whether this can be improved.

There are also issues with the texturing, but they all stem from inexperience and too much sanding. Nothing that couldn’t be fixed. Oh, by the way, this is about 9″ diameter and is made from rippled olive ash.

This entry was posted in Decoration, Turning and tagged Figured Wood, New direction. Bookmark the permalink.