This category covers all items where the diameter is less than the height, and the top does not curve in at all or only slightly, and therefore most of the inside of the form is visible. This is probably the largest vase I have made to date. It's made from Leylandii, with the outside coloured with blue and green dyes and finished with lacquer. Not meant to hold water (but this could be changed, if required). A statement piece [...]

Made from a rather large leylandii rootstock, this blue vase is definitely a looker in any environment. Surprisingly, the colours have in this case not resulted in violently different shades, but only subtle variations.

This was initially turned as just a beech vase, but at the end I decided I didn't like the shape and size of the opening, so I added a small ebony collar. Eh voila, balance is restored.

I made a similar vase a short while ago, and it sold very quickly. By then, I had already decided that I liked the idea with a wooden dot and a shaped lip, so this one was already in the making, and let's hope it will find an owner as quick as [...]

Another vase from Leylandii, in this case from a crotch piece. This allowed me to generate a form that looks like it has wings. Again, the interest comes from the contrast of the turned form with the remaining natural edge features. Unfortunat [...]

A while ago I got some pieces of leylandii from friends. Leylandii is essentially a type of cypress, but very fast growing (usually) and therefore quite soft. On this piece I left some of the bark on, as it makes for a very nice contrast with [...]

Yew is a wonderful wood to work with and to (be)hold. It flows like butter off the tool, and the surface just invites the hand to touch it. On pieces like this one, I also always try to find a shape that shows the contrast between the creamy w [...] 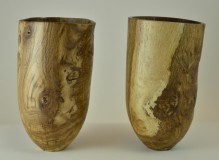 No, the title is not a mistake. These two vases are made from brown oak, which is essentially normal oak that has been infested by a particular fungus causing the dark brown colour. They were turned from green wood (i.e. the wood has not been [...]

I salvaged a piece of birch from the firewood pile at Kate's farm, and this is what came out of it. The birch had already started to disintegrate, which shows in the streaky colour changes. The shape of the blank was such that I had to make a [...]

This vase shows the classical sunburst effect, which is often used on musical instruments (especially electric guitars, the typical example being the Gibson Les Paul), on top of a layer of black dye, which was almost completely sanded off to p [...]