I know, I know, I have been busy with other stuff. Like painting rooms and fitting an apron to a corner bath, and fitting skirting to a bedroom. And yes, we’ve been away for a weekend at the Burghley Horse Trials. That’s almost a story on its own. 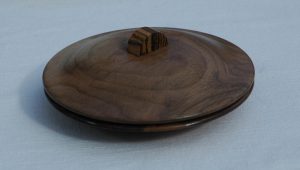 At any rate, my mother’s birthday is at the end of July, and this year we couldn’t go and see her, it just didn’t work out. So I made her a small box. The blanks were actually leftovers from a piece of commission work, where a fellow in Kidderminster wanted two identical holes cut into a slab of walnut, so he could display some ancient pieces of china. Due to the difficulties encountered there, both the blanks had a hole in the centre, which I needed to do something about. In the end I decided to use a small leftover piece of zebrano to make the handle on the lid and also a plug for the bottom. 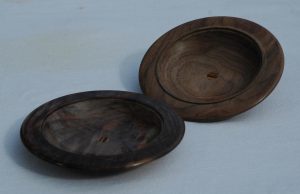 Clearly, there isn’t all that much room inside to store big things, but some jewelry should fit nicely, or maybe some other bits that need a keepsake. In the end, this really is just a way of me saying to my mother “I think of you”.

This entry was posted in Turning. Bookmark the permalink.