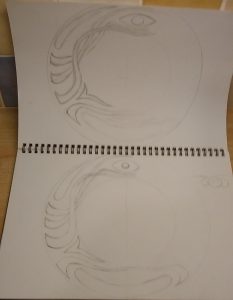 Last Saturday night, while watching a late romcom on TV, I started doodling around in my scratchbook, and when the movie was finished (and I was ready to go to bed) I had something approximating the drawing in the top half of this image.

Obviously this is only one half, but I often end up with half a design, since my drawing skills seem to work better on one side than the other, and rather than faff around with the other half, I just figure out a way of mirroring it from the first half.

So on Sunday, after a late get up, some breakfast and some more faffing  around the house, I finally went through the collection of half finished bowls (which I keep for precisely this purpose), and picked a cedar bowl, which only had the backside finished, and the top covered in blue spray paint, with two shallow grooves marking the space where I wanted to do some decorating.

Now the first challenge was tha5t the original design didn’t want to fit between the two grooves, hence the bottom drawing, where I marked the grooves first with a compass and then redrew the whole thing. I then copied it onto some grease proof paper, turned the paper over to copy the other half, and taped the whole lot onto my cedar bowl. The lines were then transferred with a ballpoint pen, leaving faint indentations on the blue surface. And then I spent most of Sunday carving the design into the bowl. And after several hours of work I ended up with this: Now you might say, not so bad. But the reality is that in terms of quality this is so far away from I am wanting to achieve, it almost made me cry. There are so many problems here, it’s unbelievable. Firstly, the paint comes loose when you put pressure on, it flakes off in small little pieces, making all the edges look untidy. Secondly, achieving a smooth curved line across figured grain is unbelievably difficult (for a beginner). Thirdly, the resulting surface is in places OK, but in other places the fibres just rip out and it looks like I hit it with a hammer. Uuuurrrrggghhh. Indeed.

In addition, with all the cleaning up of lines, the design now looks a little lost on the surface. That’s down to the fact that all the blue areas are now substantially smaller than they were designed to be.

Helen suggested I should get myself a CNC router. That would fix the problem with the untidy lines, but it would stop the paint issues. And it’s  not hand made (although Helen rightly pointed out that the design would still be mine). Plus: right now I don’t have the space or the money to afford a CNC router. Not even a tiny one.

Maybe I need to take some tuition on carving. At least now I understand why some woods are good for carving and others are tricky. Cedar (at least the piece I have here) belongs in the latter category. Probably not the worst, but definitely not the best either.

Or maybe I just need to stop fooling myself. You can’t be good at everything, and maybe carving is on of this things I am not meant to be good at. I’ll have to think about that for a while.

MInd you, I still just the whole lot off and do something else with it. Which may just include trying it all again.

This entry was posted in Decoration, General, Musings and tagged Calamity, WIP. Bookmark the permalink.