Last week I did my first paid, proper demo, at the Herefordshire Woodturners. This was booked about a year ago, and so far I haven’t any other demos in my calendar, but hopefully this will change soon.

The evening was extremely warm, following an unusually hot spring day (almost 30 degrees C), so by the time I had it all set up, I was sweating already. For a small club (only about 45 members), these guys have a very nice setup.

The HWT have their meetings in a scout hut, which in fact is actually a proper building, more like a small community hall, and easily big enough to seat 70-100 people. On the evening itself there were about 35 present. A jet club lathe and a brand new dust extractor was made available to me, and some space to show some turned items. I had a wireless microphone, which worked fine for the first hour and then the batteries gave up, and there was single camera with the output displayed on a big screen. A small canteen provided hot drinks during the break, and Paul Hannaby had a table set up in the back with various merchandise.

The subject of the evening was a box with lid and finial. I knew I could do it, but time was not to be wasted. I gave the audience a choice of two basic shapes (squat and wide vs. tall and slim) and 3 different woods (birch, yew and ash), and in the end they went for the squat shape by a few hands. I did get carried away a little on some of the explanations and answers to questions, and in the end I had 10 minutes left for the finial (which was turned from prepared holly blank). As always, when you try and rush things, that’s when you make mistakes, and I am no exception to that rule. I produced two catches in a row, had to alter the shape of the finial, and ran over by about 10 minutes, but I think the result was quite good: 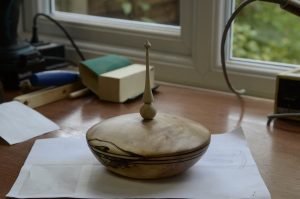 After the demo I had a brief chat with the club treasurer, and it seems everybody was happy and he seemed to think they’ll ask me back for another demo in the future. I am certainly very happy with the result.

This entry was posted in Demos and tagged Demos, Success. Bookmark the permalink.