Blast from the past

2 weeks ago an old friend of mine visited for a few days. How fast time goes!

When I arrived in Johannesburg (SA) in early January 1996, Viv Crone was supposed to be my boss. Except he wasn’t there, because he was recovering from cancer treatment. This turned out to be quite a good thing in more than one way. On one hand I got a boss from whom I learned a lot (Carl Mostert) and on the other hand, Viv and I became good friends over the next few years, and now this friendship has been renewed.

He could only stay with us for two days and didn’t want to “put us out in any way”. So I decided to take him along to the things I would have done if he wasn’t around. On the first day we took a trip to Oswestry, to visit North Shropshire Timbers, and then on to Bala in North Wales, where we paid Les Symmonds a visit in his shop.

North Shropshire Timbers is one of these places that look a little like a bomb just hit them. There are complete trees lying around everywhere, and when we arrived, nobody was to be seen. Eventually we found the son (the place is run by father and son) and he was very helpful, and eventually I drove away with some very nice kiln dried English Oak, at a much lower price than had been quoted anywhere else. This is a big timber yard (for England), covering several football pitches of land, and they have all sorts, if you are willing to spend some time looking for it. Loads of oak, in substantial dimensions. There were entire stacks of beams, 8″x 8″ and about 8′ long or longer, and slabs 3-4″ thick, ideal for rustic solid tables.

Les Symmonds runs a very nice little shop in Bala, and since we were in the area, we took a drive across the Welsh mountains (with snow caps) to Bala. Les is a retired special needs teacher and became a full time wood turner about 3 years ago. His shop seems to be going well, and both Viv and I bout some small items to take home with us. 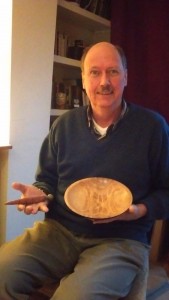 On the second day, we spent most of our time in my workshop. Basically Viv had a full day of tuition, and some fun. For starters, we rounded off some oak blanks, and made a few dibbers. Simple enough to make, and gave him a bit of a feel for the tools.

Then we rough turned a piece of lime into a bowl. this gave him some exposure to pull cuts and green wood turning. After lunch. we picked a rough turned bowl and finished it. Here’s the man with his finished items:

Apologies for the quality. I could only use my mobile phone, and the light in the house was not good. Here are some close ups of the dibber and the bowl: 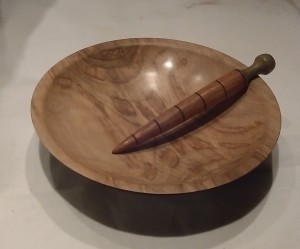 We used some dyes to give the dibber a carrot appearance. The bowl is from beech,, about 10″ diameter and 2.5″ high, with a wax finish on the inside, and some red stain and acrylic lacquer finish on the outside.

Viv seems to have enjoyed himself tremendously, and he’s now sent my a picture from his house back in SA, where the bowl takes pride of place on the coffee table.

This entry was posted in General and tagged Friends, Tuition. Bookmark the permalink.