A lot of work

A few weeks ago I had a contact from the club website, a guy close by who was cutting down a laburnum in his front garden and who wanted to donate it to the club. So I swung by one afternoon, with chainsaw and other bits and bobs. He did have some nice branches already cut down, but the main trunk was still standing. It wasn’t huge, but still quite big: about 18-20″ across. I cut it off right above the ground, and then proceeded to chop it into two halves. Laburnum is well know for checking very rapidly, and I want to avoid this as much as possible. In addition, the trunk, even though it was only about 1m (40″) tall, had considerable weight, and cutting it down the pith into halves made it much easier to move.

Now, technically, this isn’t my wood, since this guy posted on the club website. On the other hand I reckoned I was the one doing all the hard work, I might as well reward myself a little. And this was promptly confirmed by other members at the next club meeting. 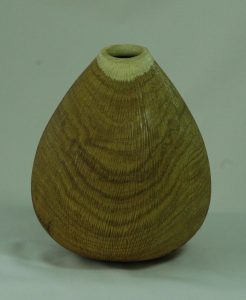 In essence I kept one half of the trunk to myself, this was cut into three pieces. One of them was cored into two bowls (currently drying out), one was a crotch which I attempted to turn into a winged bowl, but it almost flew apart at the crotch (and now I have to figure out what to do with it. The last piece was from the middle section, where the wood was thick, but not very wide. In other words, not ideal for bowls.

I’ve always had a lot of admiration for John Jordan’s work, and I thought, OK, let me try something similar for myself. So I ended up with this follow form, with the sapwood clearly visible (that was the hole point of the exercise) at the top. Initially the surface was all smooth and sanded to about 240 grit, and then I spent the next 10 hours texturing it with a small V-shaped carving chisel. 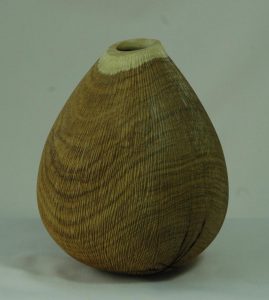 I am actually quite proud of this piece. A deceptively simple shape, hollowed to about 1/4″ and really showing off nicely the beautiful grain of laburnum. After the carving I simply brushed the surface with rough wheel and then sprayed some sanding sealer on. No distraction from the texture and the grain.

Make no mistake, this is hard work. Laburnum is about the hardest wood we get in our latitudes, and the repetitive carving action makes your hands go sore after about an hour or so. However, I think it’s worth it.

Clearly I still have a long way to go before I can compete with John, but every journey starts with the first step out of the door.

This entry was posted in Turning and tagged Figured Wood, Shapes. Bookmark the permalink.