This is a bit of a strange time for me. I have done some work on some artistic pieces, but at the same time I am also keenly aware that in about 4 weeks time I will be standing on a stall at the BCTF in Harrogate, and since we had a bit of disaster 2 years ago when trying to sell artistic pieces, this time around I decided to also have a lot more simple items on the stall.

Fruit in the making…

I am well down that road, having already completed a few dozen tealight holders and candle sticks, with another 10 or so just needing some final touches. Then there’s kiddie’s dough rolling pins. And fruit, mostly apples and pears. The picture shows the next batch mostly turned, but yet unfinished.  By the time I am typing this, the only thing missing is the stalks at the top.

There will be other small items, such as bottle stoppers, letter openers, key rings, light pulls and so on. More pictures to follow.

The other thing that’s really bothering me is that I cannot find my tripod. Taking good still images really does need a trtipod. I’ve tried higher ASA ratings and lower picture settings, just to get shorter exposure times on the camera, but the results are just not the same. This is really a hangover from our move more than a year ago. Since the building work hasn’t proceeded at the anticipated pace, we still have loads of cardboard boxes in the garage and it’s probably in there somewhere. Except I cannot find it. 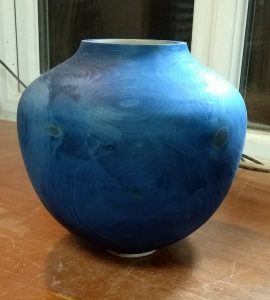 Two of the more artistic items are a large blue hollow form or vase and a carved tazza. The blue hollow form is made from Leylandii, and the opening at the top is big enough to allow my whole hand to fit inside, which in turn allows for much better sanding. This was, in fact, dearly needed, as the wood would not cut cleanly on the inside and I had some terrible tear-out to deal with. I am happy to report that this is now all done, and all that’s needed is some finish. I am a little nervous, to be honest, about that large knot on the shoulder. I made another hollow form not long ago, and it now decided to develop a very long crack right out of its large knot. We’ll have to see. 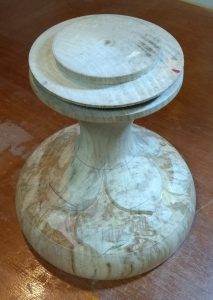 One piece tazza with carving

The other item that is work in progress is this one-piece tazza. The rough outline of the form was turned well over two years ago, and it’s been sitting on the shelf for a long time, waiting for some inspiration how to finish it. I had the idea of carving the top part of the stem and the underside of the dish into an array of leaves quite some time ago, but did not have the necessary carving tools (and skill) until recently.

The wood is spalted sycamore, and it is completely dry, so at least I don’t have to worry about further distortion or checking. And it’s got a bit of figure and colour to it, so most likely I won’t do any colouring to the final item. Clearly the carving isn’t finished yet, there’s still a long way to go, but I think the end result will be quite fantastic.

This entry was posted in Other work. Bookmark the permalink.