The value of a good tree surgeon

Yesterday I had a call from my tree surgeon, to say he’d brought down a big ash tree and whether I wanted some pieces. I went to see him after work, and he wasn’t lying. It was BIG ash tree. He even showed me a video of the moment when it fell.

He had some rounds of the tree on his backyard. I have absolutely no idea how he managed to get them there. He claims he rolled them in, which is possible, but it still doesn’t explain how he got them off the truck in the first place. He had even made the special effort to cut one of the rounds as big as they could handle it, and that’s the round I marked up for him to cut into slabs. I also picked a few pieces he had already chopped off another round.

Today I went to pick up the round cut into slabs, and here it is: 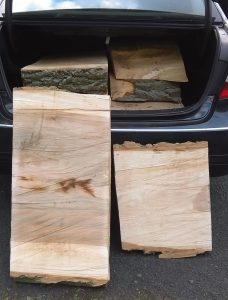 This tree, with an oval trunk, measured 3ft in one direction and almost 4ft in the other. I had two  thinner slabs cut from near the pith, both about 2″ thick. These are 36″ long and 18″ wide.  They will make some very nice big plates, because this is essentially quartersawn wood and therefore as stable as it gets.

Next I had several thick slabs cut, roughly between 4 and 6 inches thick, same width but obviously a little shorter. And finally the two end pieces, 5″ and 6.5″ thick.

What you can just about see on the pictures is that all of the slabs have a very nice contrast between sapwood and heartwood, and some of them even have some very nice rippling going on (fiddleback for you Americans).

And guess what: IT’S ALL FOR FREE!

This entry was posted in General and tagged Sources. Bookmark the permalink.