Here’s my little helper in the workshop: 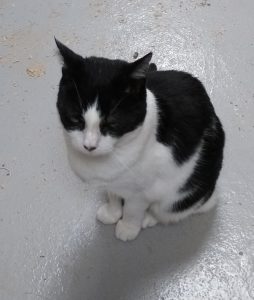 This is Gizmo, one of our two cats. He came to us about 10 years ago, from a friend who had rescued him from a litter of kittens that came from a street cat somewhere in Bilston. She took him in out of mercy, and had him for some time. Then she noticed that other cats in the neighbourhood were being mistreated badly by some yobs, and asked us whether we would have him. At the time we already had two cats, Flossy and Boyo, and we weren’t quite sure how he would fit in. Initially he was very timid, but they got along just fine after a short while.

Boyo passed away a few years ago, and is now buried in the backyard of our previous home in Pepper Hill. He crossed a road at the same time as a car came along, and needless to say, the car won. That was a real shame, as Boyo was a bundle of fun. You could put him on a skateboard and roll him down the road and he would enjoy the ride.

Gizmo is very laid back, but also very curious. He always comes exploring to the workshop, stays for a short while, sticks his head in every open cupboard, then meows at me over the lack of suitable prey and makes his departure. On this occasion I got sitting nicely for me on the floor, right in the middle of the workshop, so I couldn’t really do anything else than take a picture and wait for him to leave. He’s now 12 years old, and hopefully we’ll have him for a good few years more. We will miss him badly when it is his time.

This entry was posted in Musings and tagged Other. Bookmark the permalink.