I haven’t posted much for the last month, mostly because I was very busy making things. Mostly boxes, in preparation for another round of the chairman’s challenge at the West Midlands Woodturners. The theme for this month was “a lidded box”.

OK, so what to do. Obviously most people would enter the typical thing, a more or less cylindrical box with a knob on the lid, and a very tight fit (a turner’s fit). You know, the one where you have to actually use some force to get the lid off, and it pops when it does come off.

So I thought, I am not going to do that. We need something different here. So I made several boxes, with different designs.

The first one is actually a copy from a box I found on google images, made by Fuji Seisakusho. I loved the simplicity of the form, and my copy came out well enough. Obviously I don’t have urushi lacquer, so I just used black stain and a wax finish on top. Interestingly enough, when I started polishing the wax, the remainders of the turpentine reacted with the spirit stain underneath, and my polishing  mop went all black. Need to remember that. The box and the lid were made from monkeypuzzle, and initially it looked really nice, with a branch coming through the lid. However, the monkeypuzzle wasn’t as dry as I thought it was, and by now the lid has warped badly (hence no picture), and I will have to make another lid.

Anyways, the second box was a very simple classic design and made from oak: 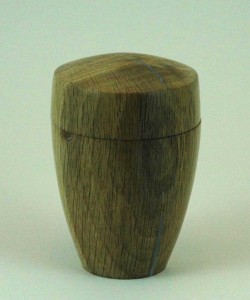 It looks a bit dull on the picture, because the lighting isn’t perfect, but it is actually a very nice little box. The cracks in the oak were filled with the usual aluminium powder and epoxy resin mixture. Classic shape, nice finish, but a bit boring, right?

So on to the next design: 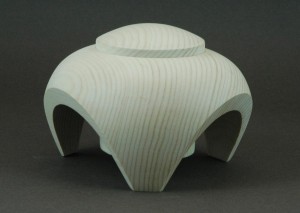 Now that was a lot more interesting! The shape came out of some doodling around with Helen, and the strong grain lines in the monkeypuzzle, combined with the simple geometric shapes create by intersections of circles (that’s really all it is) generates a very pleasing result. 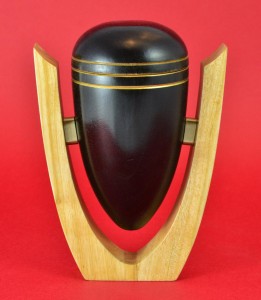 But I still wasn’t sure whether any of these would win the competition. So I started another design. This time a small, almost egg-shaped box, suspended in air by two brass struts linking it to a frame made from cherry . That’s the box I entered into the competition.

And because this box required a lot of steps with waiting time in between, I made another one, just for fun.

I had made a nice finial from a piece of cherry sapwood, which is almost white, and combined this with a piece of sycamore, stained dark red, and a lid made from laurel burr. Again, a classic shape, but quite elegant. 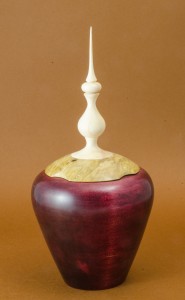 Right at the end of making the lid, disaster struck: a small piece of the burr broke out and (due to its size) was not to be found. What to do? I could have tried to fix this by taping the area and then filling it with superglue. But I knew that it would probably stick out badly, so I decided instead to make a feature of it, and sanded 4 small cutaways into the edge of the lid.

And then, to confirm this, the box with the cherry finial was selected to go on display at the club stand during the Tudor Rose competition next month. Goes to show that what I think is my best piece is not necessarily what others think. Dang indeed!

This entry was posted in General and tagged Success. Bookmark the permalink.